On Monday evening we held a screening of The Haystack surveillance documentary at Birmingham Open Media, followed by a discussion of what the recent Brexit vote means for digital rights.

END_OF_DOCUMENT_TOKEN_TO_BE_REPLACED

Chances are, if you’ve visited the Open Rights Group Birmingham you know and care about this already. The problem is, how many of your friends and family who aren’t into digital rights/politics/human rights  first of all know about what the government is up to, let alone are committed to stopping them?

Right now, the campaign is focused on asking supporters to email their MPs about the Investigatory Powers Bill. The hope is that if MPs receive enough emails from their consituents expressing concerns over the bill, they will be more likely to carefully consider the bill and not simply nod it through.

If you’ve not done so already, please email your MP today! Open Rights Group has created an online tool for contacting your MP as well as some suggestions for what to say in your email.

As important as it is to email your MP about the Investigatory Powers Bill (IPBill), it can be a little dull. Given the mindboggling array of digital technology at our disposal, and open Rights Group’s base at Birmingham Open Media, surely we can do better than email?

For that reason, we’ve decided to hold a special ‘Art Against the IPBill’ session next Wednesday (16 March). Please sign up via our ORG Birmingham Meetup page.

Think memes, animated GIFs, looping videos, audio storytelling and anything else that will get across all that is wrong about the IP Bill. Liberty have produced a very good analyis called the IP Bill: the good, the good, the bad and the downright scary but I can’t help but feel it’s missing a LOLcat.

Bring along anything you think will help you create. This could be your trusty laptop, tablet or phone. Alternatively, you might like to go old school and work with a pen and a pad.

We’re hoping to have some fully paid-up artists from Birmingham Open Media and beyond to help inspire us with their creativity. If you’re an artist and you’d like to get involved, please do get in touch or simply drop in on the night.

Looking forward to seeing you next Wednesday. And in the meantime, please don’t forget to email your MP.

Please RSVP for the session via the ORG Birmingham Meetup page

You’ve probably heard by now that earlier today (1 March) the Home Office has published the revised Snoopers’ Charter / Investigatory Powers Bill less than three weeks after three reports by MPs and peers made 123 recommendations for changes.

On first reading, the revised Bill barely pays lip service to the serious concerns raised by the committees that scrutinised the draft Bill. The Bill still includes police powers to see which websites and apps we use, and bulk surveillance powers for GCHQ – it needs serious improvements.

You can find out more on the Don’t Spy On Us coalition website.

Ask your MP to stand up to the Home Office

Now that the Home Office has published the Bill, we need MPs to stand up to the Home Office’s attempts to ride roughshod over parliamentary scrutiny and avoid having a proper public debate.

You can help by contacting your MP to tell them you are unhappy about what the Home Office is doing and asking them to make sure the Investigatory Powers Bill is not rushed.

The national Open Rights Group has created an easy-to-use form for emailing your MP:

Remember, you don’t have to write a lot, the most important thing is to contact your MP as soon as possible to remind them that the Home Office should not rush the Investigatory Powers Bill should not be rushed through parliament. The main messages to include are:

We’d love to hear what kind of repsponse you get from your MP. You can let us know via Twitter @OpenRightsGroup and @OpenRightsBrum

Keep up to date with ORG Birmingham

The Open Rights Group needs your help! Please read on for how you can help stop the government passing the seriously flawed Investigatory Powers Bill.

Today (1 March), the government plans to introduce to the House of Commons a revised version of the Draft Investigatory Powers Bill.

This is less than three weeks (!) since the Joint Committee set up to review the bill published a report calling on the government to make significant changes to the bill, including:

– Strengthening privacy safeguards
– Clarifying the government’s position on encryption, which is essential to modern life and the digital economy
– Making the case for mass surveillance/bulk collection of everyone’s data in a way that is legally compliant with the UK’s obligations to protect the right to privacy

You can read more about the committee’s recommendations over on the Open Rights Group website.

These are complex issues and the stakes are incredibly high – our civil liberties and national security are at stake. It is difficult to believe the government has given itself enough time to take on board the feedback it has received. Instead, the government is giving the impression that it is determined to pass the Investigatory Powers Bill at any cost, in order to free up more time to focus on higher profile issues, such as this summer’s referendum on EU membership.

If we are stop the government rushing through the Investigatory Powers Bill, we need to gain the support of MPs.

You can help by emailing your local MP to let them know you are concerned about the government’s plans to rush through the Investigatory Powers Bill.

You can easily find out who your local MP is and email them directly via the excellent WriteToThem website.

Please don’t let the technical aspects of the surveillance debate put you off contacting your local MP. Simply letting your MP know you are concerned about the government’s approach and asking them to consider the issues will make a real difference.

Wherever possible, please include in your email a link to the guidance the Don’t Spy on us coalition has produced for parliamentarians. This explains in more detail the problems with the Investigatory Powers Bill and what MPs can do to make the bill fit-for-purpose.

When writing to your MP, remember to be polite and encouraging, not rude and demanding. Respectfully making your local MP aware of the issues surrounding the bill is the best way to build support for an Investigatory Powers Bill that is truly fit-for-purpose. 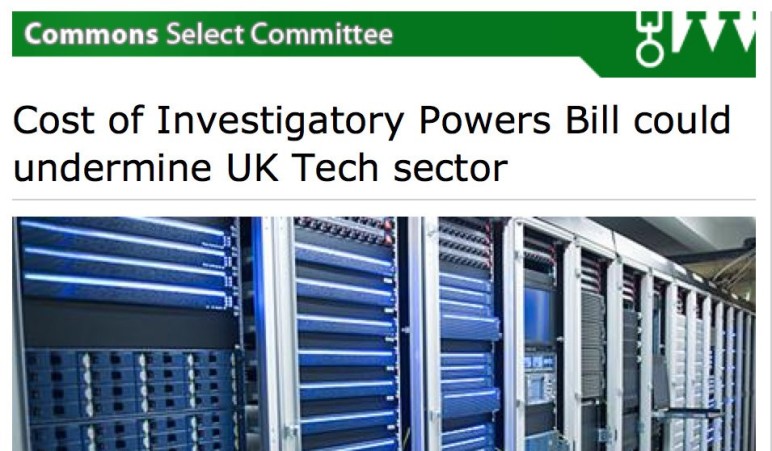 Earlier this week, the House of Commons science and technology committee published a highly critical report on the bill, with its chair, Nicola Blackwood MP commenting:

The current lack of clarity within the draft Investigatory Powers Bill is causing concern amongst businesses. There are widespread doubts over the definition, not to mention the definability, of a number of the terms used in the draft Bill. The Government must urgently review the legislation so that the obligations on the industry are clear and proportionate.

In particular, the report highlights the following problems:

It’s worth noting that the committee’s remit was purely to look at the technical feasibility of the government’s proposals and how these might affect communications businesses, not whether the communications monitoring provisions or whether they are proportionate to the threats they are intended to deal with. These issues are expected to be addressed by the joint committe Joint Committee established to scrutinise the draft Bill as a whole.

I believe the criticisms levelled at the bill in this report are significant for a couple of reasons.

Firstly, by focusing solely on the technical feasibility of implementing the bill, it manages to side-step the highly polarised debate between privacy and security advocates. This report says, irrespective of your views on the merits of expanded monitoring of communications, you should be concerned as a citizen and taxpayer about the feasibility of implementing the government’s plans at anything approaching a sensible level of expenditure.

Secondly, by holding up the prospect that the Investigatory Powers Bill will do real harm to the growing UK tech sector, the report will hopefully encourage the government to modify its approach, if only to protect its supposed reputation for business confidence.

Both these signals – questions over the feasability of implementation and the likely damage to the UK’s growing tech sector – will not  in itself be enough to stop the Investigatory Powers Bill becoming law, but it’s a start.

The Joint Committee is due to deliver its full report on the Investigatory Powers Bill no later than 17 February. It will be interesting to see whether this committee takes a similarly critical stance on the merits of expanded monitoring provisions and the limited amount of time the committee was given to scrutinise the bill.